A doll, made circa 1930, representing a Safari Girl 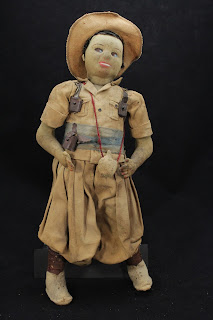 She resembles the famous American traveller and explorer Osa Johnson

Osa Johnson is also known as: The Woman in the Safari Outfit

Osa Helen Johnson Leighty (1894-1953) and Martin Elmer Johnson (1884-1937) were an American couple, adventurers and documentary filmmakers. They travelled and explored Africa in the 1920's and 1930's. For many more pictures of Osa and Martin, visit the site of the: Martin and Osa Johnson Safari Museum. The museum itself is located in Chanute, Kansas 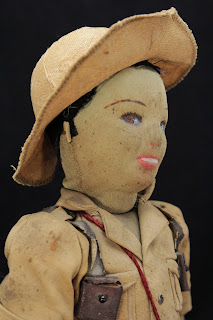 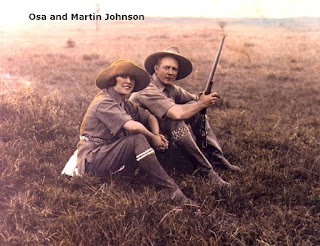 an antique, bronze sculpture, depicting the buste of a charming young girl, titled: 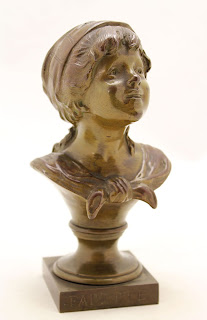 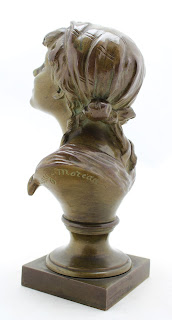 Fadette is a character from the, in 1849 published, novel La Petite Fadette or Fanchon, the Cricket, by George Sand / Amantine Lucile Aurore Dupin (1804-1876) 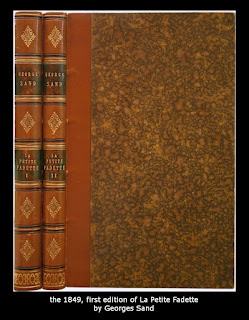 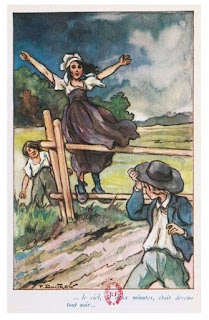 Fadette with the twin brothers, Landry and Sylvinet 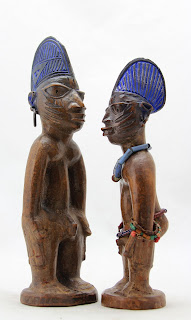 These figures represent the soul of deceased newborn twins.

the traditional Yoruba twin belief is based on the immortality of the soul and on it's reicarnation, although representing deceased babies, they are not referred to as dead, rather is said to "have travelled" or "gone to the market" Yoruba Peoples regard twins as extraordinary beings protected by Sango, the deity of thunder. They are believed to be capable of bestowing immense wealth upon their families or misfortune to those who do not honor them. Twins are honored with carved memorial figures when they die. Their elaborate hairstyle and beaded jewelry mark their honored status, when twins are born to a woman of royal lineage, they may qualify in the event of their death for special beaded garments.

We see carved wooden, male figures with massive shoulders and natural carved male genitals, different plaited hairdo - irun didi - in a high domed coiffure or "hunters's cap", colored blue, both with facial scarifications on their forehead and cheeks, both have pierced ears, the largest one is wearing metal earrings with a beautiful patine,

but the most intriguing of these particulair statues of Ibeji, are their unnaturally large hands, almost covering their whole legs 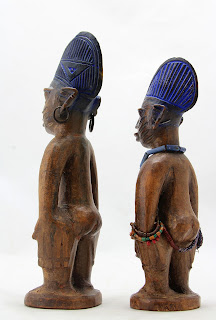 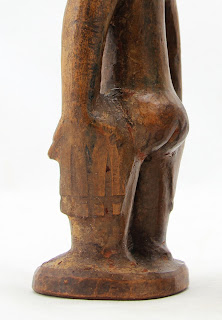