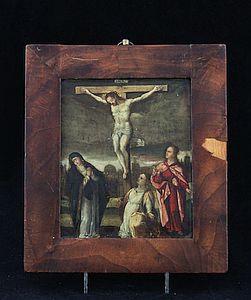 an early 17th century oil painting on copper plate, on a wooden panel:
The Crucifixion of Christ
on Golgotha, in the background a view on Jerusalem, with The Dome of Rock.
The three figures in the front are thought to be The Three Marys. Dressed in blue The Virgin Mary - Holy Mother of Christ, dressed in yellow Maria Magdalena and in red Mary Clopas, but the person in red is also mentioned to be John the Evangelist.
A tag on the back has the Dutch text: dit schilderijtje is voor Truus Lisfone, meaning a previous owner wanted it to be passed on to a female person called Truus Lisfone
size, excl. frame: 15,8 x 13 cm 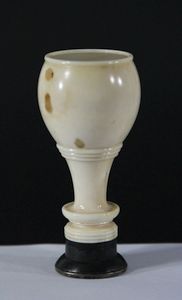 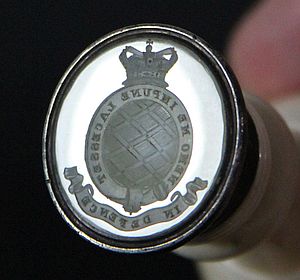 an antique, silver mounted lacquer seal with a white agate matrix,
on the stamp:
Nemo Me Impune Lacesset
In Defence
This is the national motto of Scotland and the latin motto of the Most Ancient and Most Noble Order of the Thistle, the highest chivalric order of Scotland.